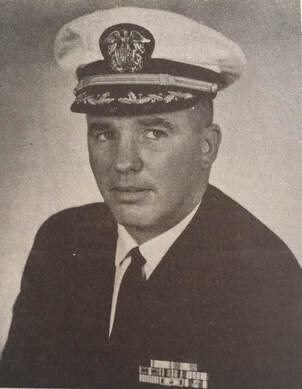 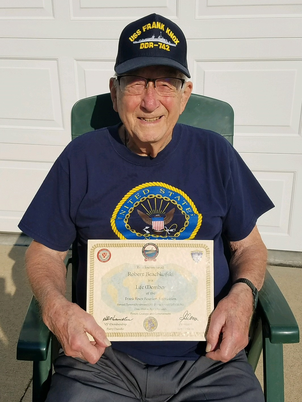 It's with deep sadness that we say farewell to Robert " Bob" Beachkofski.
On Feb 4, 2021, he ran out of steam at the ripe old age of 102 years and 10 months. He told  a nurse just the other day that he was looking forward to celebrating his 103rd birthday in April!
Due to covid, the funeral service is being livestreamed and only the immediate family and a color guard will attend. We're hoping to have a gun salute (performed right outside the funeral home), but I don't know if that will be part of the livestream service.
Dad was very proud to have served in the U.S. Navy on the U.S.S. Frank Knox. It was a highlight of his life and he had very fond memories of his World War  II experiences as a sailor. During the pre and post Commissioning equipment upgrade, Bob assigned guards, and guarded, the new radar, stored in a warehouse, and Top Secret at the time. He resumed his disbursing duties only to find shipmate AL SMITH RD1 in and out of the supply office for parts and installation requests.
Al and his radar team accounted for six Japanese planes guarding Halsey’s Third Fleet. He and my mother Eileen also thoroughly enjoyed attending the U.S.S. Frank Knox reunions. Some of his friendships with fellow sailors lasted over 60 years. 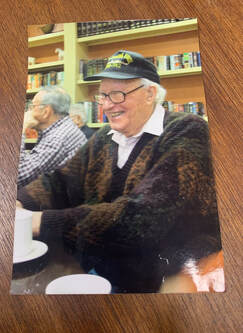 Shortly before Irv Eisenberg RM3 had a stroke in August he recalled the details of how the original USS FRANK KNOX crew was formed. After the ship was launched it traveled north into the Androscoggin River inlet, then Southwest into Casco Bay out side of Portland ME. From Casco Bay you continue around Cape Elizabeth into the Gulf of Maine past infamous Wood Island. Boston Navy was the destination for the ship to complete fitting out.
The crew was formed in Norfolk VA, trained an organized there while the ship was fitting
out. Irv recalls there were 12 officers and 144 enlisted, including chiefs. The crew was then
transported from Norfolk to Boston by train to meet their new ship. Shortly after we spoke
on the phone, I mailed Irv the original crew roster of plank owners as well as a summary of
the first-year activities prepared by the late Bob Beachkovski, SKD2. Irv acknowledged
receiving the package from me and delighted in the detail. His stroke followed a few days
later. The story tellers voice was silenced by his stroke. He passed away aa little over a
month later. It was time. He was 96.
​
In our many phone conversations he detailed much of the ship’s early history and stories
from areas where the ship docked. His radio shack was located next to the radar and
jamming equipment behind the bridge. He was in touch with many of the plank owners and
first crew. Through Irv, I was able to interview several, including some who shared their
dairies. A big thanks from all of us for sharing so much.
Evans          Thomas            67-70                     FTG3

​THOMAS EVANS, FTG3, On Board from 1967 - August 1970.  Passed away May 13, 2003 in Orangeville, PA.  His death was reported by his brother, Army Veteran John Evans.  They served in the military at the same time.  John was in the Army in country Vietnam (Cam Rahn Bay) when Frank Knox was planning a stop in Vung Tau.  John's account of a planned visit with his brother is in the blog.  John Evans, texasevans@yahoo.com. (Reported May 31, 2016) 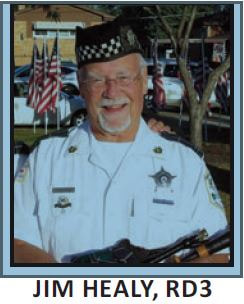 James E Healy Jr. retired Sargent of the 24th district C.P.D. Beloved husband of Susan nee Soffe. Loving father of Julie Marie (Joseph) Healy and James C.P.D. (Julie Marie). Proud grandfather of George, Michelle, Rachel, Meghan, Leah, and Paige and great-grandfather of 4. Dear Brother of Lawrence retired C.P.D. (Betty). Fond brother-in-law of Bonnie (Jeff) Beyer.  Private interment at Abraham Lincoln Cemetery Elwood IL. Jim was a proud member of the United States Navy serving on the U.S.S. Frank Knox. He was a proud long time member and assistant pipe major of the Pipes and Drums of the Emerald Society.  Jim was a super tour guide in Chicago, telling us who died where, police stories from his career and guiding the tour driver to see a lot extra sights and had the driver loving every minute of the tour. The FK Board has decided to have a Jim Healy Emerald Piper at all future reunions to honor Jim. 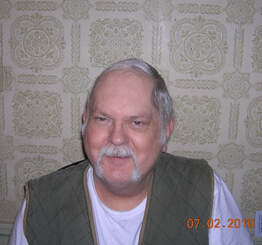 ​   Richard Huehn YN# received a call from Gary’s wife, Carol, reporting Gary had passed away October 13 of heart failure/COVID. Gary was aboard 1962-1966 and served in the forward fireroom according to Don Greer BT along with Mike Haloski. Carol sent in two photos of Gary, one early Navy photo and the second is Gary in later years. Gary is part of the O- Board Salvage Crew that helped stabilize the FRANK KNOX while on Pratas Reef. If you have any memories of Gary while aboard, please share by contacting
the Editor at 619-992-9449​ 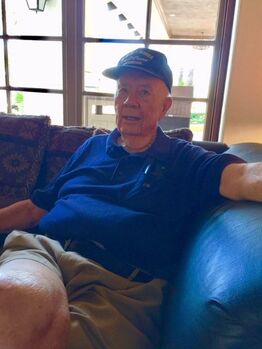 New orders for our friend and shipmate Russ Judah LCDR ret. Russ was last with us to celebrate the 75th anniversary of the ship and plaque dedication at Mt Soledad National Veterans Memorial. He reunited with fellow officer Hank Huber to share stories of their rime deployed to Korean waters 1959-53.
Russ and I had many calls and visits. True to his word, he shared his reflections with me and recorded his memories at the Nimitz Pacific War Museum in TX. FKRA and Russ both benefited from the association. Russ was a Life Member and valued contributor to our archives.  Fair winds and following sea, Russ.   Steve Cross
​
Russell was born on his family farm in Middle Grove, Missouri on July 6, 1926. After his father’s death in December 1933, his mother moved the family to Mexico, Missouri where Russell grew up and graduated from high school in 1944.  Russell left Missouri at age 17 to attend the US Merchant Marine Academy in Kings Point, New York, graduating in August 1945 under the accelerated WWII program. He was immediately commissioned as an Ensign in the US Navy, serving mostly in the Philippines and occupied Japan and seeing the world from his ship, the oiler Mission Loreto. Between his service in WWII and Korea, Russell continued his education on the GI Bill at the Missouri School of Mines (now the Missouri University of Science and Technology) in Rolla, Missouri. He graduated with a BS in Mining Engineering with a Petroleum option in 1950.
Upon graduation, Russell moved to Houston to join a pipeline startup, Transcontinental Gas Pipeline Company, now a part of Williams Company. Within a few months, Russell was reactivated for the Korean War and served as an officer on the destroyer DD-742 Frank Knox for active duty in Korea 1950-52. He continued his military service in the Navy Reserves, reaching the rank of Lt Commander before retiring in 1969. Russell returned to Transco after active duty, moving frequently to supervise many pipeline and plant construction projects. He also earned an MS in Industrial Engineering at night from the University of Houston in 1956. Russell spent 36 years at Transco/Williams, all in engineering and engineering management positions before retiring in 1986. He was a registered Professional Engineer in 19 states and a lifelong member of the Society of Petroleum Engineers.
Russell married Jacqueline Marie Williams (Caldwell HS ’55) on October 12, 1957 at First Baptist Church, Caldwell. For the first several years of their marriage, they moved frequently to work locations where Russell supervised pipeline construction projects, returning to Houston in 1965 and raising their family there. In 1990, Russell and Jackie moved to South Padre Island, where they were active members of the SPI/Brownsville community. Russell was a familiar figure serving in several community organizations including the Cameron County Appraisal Review Board. Russell continued his love of the sea as a lifelong power boater and with active involvement in the US Coast Guard Auxiliary and US Power Squadron, serving in many leadership positions and teaching countless boating safety classes.
Russell is survived by his son, Russell Jeffrey, wife Tonya and grandsons Kyle and Drew, all of Houston and daughter Janeen and husband David TenHoor of Bryan. He was preceded in death by his wife Jackie, daughter Gwendolyn and younger sister Wanda Judah Ely of Columbia, Missouri. 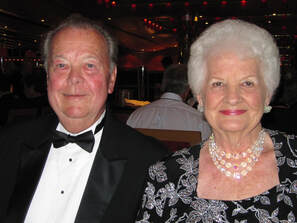 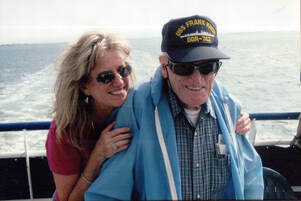 The entire USS Frank Knox Reunion Association family is saddened by the passing of 92 year old Al Smith of Annapolis MD.  Al died Monday, June 3, 2013.  As a World War II veteran serving aboard our ship, Al missed being a "plank owner" by a mere 4 weeks.  He fully enjoyed our reunions and attended many of them with his daughter Helen. He had many friends in the association and will undoubtedly be missed by all.
Al was a WWII veteran,RD3, plank Owner on USS Frank Knox DD-742.  He served aboard from 11-1944 through 6 -1946.  AL was part of the "Jammin' Joes" using the radar and jamming equipment to great effect receiving credit for 10 Japanese planes shot down. One narrowly missed FRANK KNOX, crashing into the ship behind the KNOX causing much damage.  FRANK KNOX also escaped two torpedo attacks.  One attack was a single torpedo from a Submarine hunted by the KNOX.  The second attack was more serious - a spread of three torpedoes from a submarine again hunted by the KNOX. An emergency turn allowed the torpedoes to pass alongside the ship while top side officers and sailors watched anxiously.
. 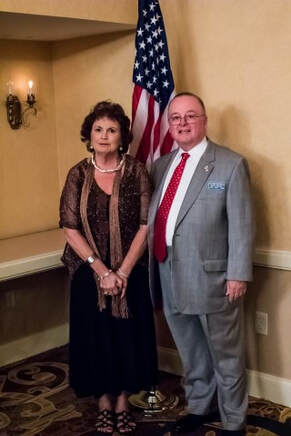 ROBERT (Bob) SUMMERS, STG3, On board from 1967-1970.   BOB SUMMERS, STG-3, passed away this morning (5-12-16) of cancer.  His death was reported by his daughter Jennifer. He is survived by his daughter and two sons.  Many of you will remember Donna Scuitto Bob's companion at many reunions.  Donna and Jennifer and family kept careful watch over Bob during his illness and during his final days.  Notes can go to family and friends at Bob's Foster City address below.  I'll post notice of services when Bob's family decides location and date.  Orv and Nancy plus all of us who worked closely with Bob on the Frank Knox Reunion Association will miss him.  Bob left the Reunion Association with a strong board and a vision which will keep the FKRA vital and growing in the coming years .  SteveCross, Webmaster 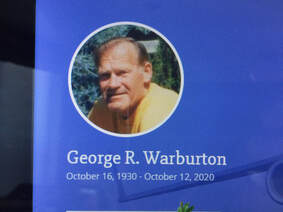 George R. Warburton, age 89, entered into rest on October 12, 2020 at the Cloud County Health Center, Concordia, Kansas.  He was born on October 16, 1930 in San Pedro, California to George H. and Margaret H. (Dreeshen) Warburton. On September 25, 1952 he married Lily L. Cook in Las Vegas, Nevada. George served in the US Navy for 9 years aboard the USS Jason and USS Frank Knox.  He then joined the US Air Force for 11 years retiring honorably in 1968.
George sold insurance for Mutual of Omaha for a short time, before starting his career in law enforcement in Wakefield, Kansas as an Auxiliary Police Officer.  In 1973 the family moved to Clifton, Kansas where he served as the Chief of Police.  He then served as Deputy and as a Police Officer in Beloit, Kansas.  In 1977 they moved to Clyde, Kansas where he became Police Chief and served with the Cloud County Sheriff’s Department.  George was employed by the US Postal Service in Clyde as a rural mail carrier until his retirement.  George and Lily enjoyed traveling, and camping.  They were members of the Rising Clouds RV Club. They traveled throughout the US in their RV meeting and making lots of new friends.  He was a member of the VFW Post #7515 and Masonic Lodge both of Clyde and American Legion Post 227, Clifton, also the Kansas Peace Officer Association.
He is survived by  his wife Lily of Clyde, son, Bruce Warburton, Wray, CO; son, Mike Warburton (Dana), Great Bend, KS; daughter, Cindy Derusseau (Mike), Clyde, KS; son, Robbin Warburton (Kristi), Las Vegas, NV; 6 grandchildren, 5 great-grandchildren.   He was preceded in death by his parents, George and Margaret, a son, Edward Warburton, and a brother, Harold Warburton.